Gabrielle is a licensed landscape architect and founder of Los Angeles-based Swamp Pink Landscape Architecture.  She possesses over 18 years of experience in planning and executing landscape projects.  Throughout her career she has focused primarily on community greening and water-wise projects that improve the lives of Angelenos and the health of the environment.  Over the years Gabrielle has worked with a variety of local non-profit organizations including TreePeople, LA Conservation Corps, and Pacoima Beautiful.  In order to design for the community's needs, she works closely with community members, youth groups, schools and various city agencies and departments.  She holds a BA in Landscape Architecture from the University of Oregon and in 2013 joined the Board of the Los Angeles River Artists' & Business Association.

Originally from the East Bay in Northern California, Katherine attended the Otis College of Art & Design and has since the mid 90's worked in the Los Angeles garment industry.  Over the course of this time she worked extensively in and around downtown's industrial areas which led to her growing passion and curiosity for the place.  In 2009 she decided to make downtown L.A. her home and became concerned with the notable absence of trees in Skid Row where she currently resides.  Katherine's community advocacy started with her decision to initiate a neighborhood tree-planting in 2010.  In 2013, Katherine served as the Public Chair of the Parks Committee of the Downtown Los Angeles Neighborhood Council.  She continues to advocate for her community and is currently focused on the formation of the Skid Row Neighborhood Council. 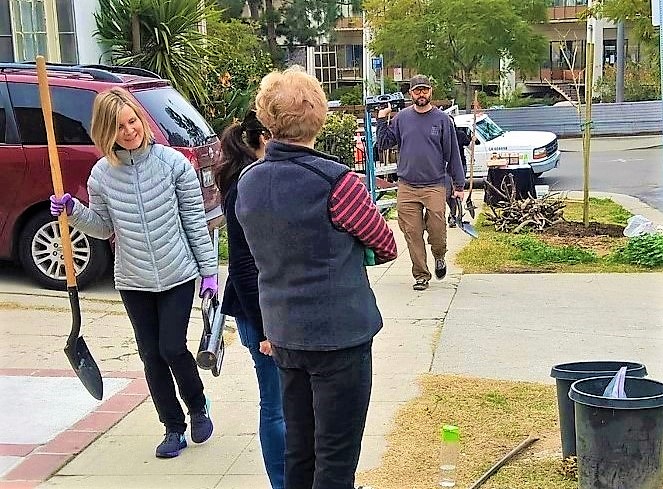 (In Memory Of) Gudrun Gotschke, Advisory Board Member

In June of 2020 IDG lost a wonderful friend and advisor, Gudrun Gotschke. Gudrun’s unique connection to both the Arts District and Skid Row along with her passion for trees, urban farming and her generous heart made her an invaluable supporter to our organization. We will miss her kindness, wisdom, and her bright smile and we will be forever grateful for the opportunity to know and work with her. Please read Gudrun’s bio below so that she can continue to shine with us at IDG.

Born and raised in Germany, after extensive travels, Gudrun moved to the United States in 1997.  After living in Santa Monica and working at UCLA as a RN in the NICU, she moved with her husband and daughters to the Arts District in 2004.  She subsequently witnessed the area evolve into a lively neighborhood with a strong community spirit.  She had a passion for cultivating a small urban garden on her rooftop that continues to provide fruit and vegetables for her family, Gudrun was excited to be part of a growing urban farming trend.  She also volunteered with Ur-Bin, a local organization spearheading efforts to create edible gardens at Skid Row Housing Trust projects.

Trina is a peer specialist in the mental health sector with over 15 years of experience working in social and environmental non-profit programs.  Her passion involves working closely with people of all walks of life to encourage, inspire, and empower those in under-served urban communities.  She currently runs IDG's Street Tree Team which conducts monthly tree care walks in the community with local volunteers.  Trina previously worked for non-profit organizations the California Conservation Corps (CCC), the LA Conservation Corps (LACC), and L.A. Family Housing.  She discovered her passions for social and environmental work while employed with the CCC and LACC.  Projects she has overseen include tree plantings, trail construction, scenic litter abatement, graffiti removal, mural paintings, and facilitation of life skills workshops.

Mark grew up in Los Angeles and worked in downtown LA for more than 15 years.  Mark has held various positions in public accounting and investment banking most recently at Deutsche Bank in New York.  He is currently CFO of Mobile Mini, Inc.  Mark has held a lifelong interest in urban landscape design having lived and worked in several large urban environments including Chicago, London, New York, and Los Angeles.  Mark earned his MBA from UCLA.

Tucker is currently a business consultant with ZW Associates, a global sales and marketing consulting firm, where he uses data-driven analysis to advise healthcare clients on a variety of strategic sales and marketing issues.  He also serves as a volunteer at Chrysalis Enterprises where for 6 years now he has provided formerly homeless individuals with job placement services.  Tucker was an early supporter of Katherine McNenny's Skid Row greening efforts through their mutual connection at the Little Tokyo Lofts building.  Tucker holds an MBA from UCLA.

Ryan currently serves as Environmental Service Manager for the Koreatown Youth & Community Center where he oversees a staff of 10 dedicated to community quality of life enhancements including tree planting, graffiti removal, and other beautification initiatives.  KYCC is one of LA's largest greening organizations with over 10,000 trees planted in the past decade.  Prior to KYCC he served as Senior Tree Care Manager at TreePeople where he developed what became the premiere tree maintenance education and training program in Los Angeles.  Ryan is an ISA Certified Arborist and holds a BA in Communications from Pepperdine University.

Bobby Buck is an Arkansas native from the small town of Malvern aka “Da M-Town”.  He found his way to the West Coast after a period of street life that had him living mostly on the wrong side of life.  Once in Los Angeles, Bobby battled with homelessness and was referred to services in Skid Row.  From there, he turned his life around and since 2010 has been focused on giving back through community service, entrepreneurship training, and hosting his own radio show at Skid Row Studios called “The Bobby Buck Show”, which focuses on issues in Skid Row, South LA, and beyond.  Bobby was at Katherine’s very first tree-planting on San Pedro St. in 2010 and has been a loyal supporter of trees ever since.  If you would like to learn more about inner-city issues and hear directly from the people, follow Bobby on social media.

Charles Evans is Regional Manager for both the Skid Row and South Los Angeles School On Wheels Learning Centers.  Prior, he spent five years working for FAME Renaissance as Transportation Specialist and Environmental Outreach Specialist under Reverend Cecil Murray.  Charles is a member at Bryant AME in Los Angeles where he works with young men under the ministry.  Charles keeps his students involved in environmental projects such as annual visits to TreePeople where they learn about the benefits of trees, rainwater capture, and other sustainability solutions.  Students at the Skid Row Learning Center maintain their own private garden growing tomatoes, broccoli, and mint along with other vegetables and herbs.  In 2013, Charles and a group of his students participated in IDG's "Skidrokyo" tree planting event in an effort to promote healthy and sustainable communities.  Charles holds a BA in Business Administration from Whittier College.

Krista is President and founder of Connective Issue, Inc. a consulting firm specializing in watershed management.  Her firm was recently hired by the Newport Bay Conservancy as Watershed Coordinator to fulfill a 3-year grant from the California Department of Conservation.  Previously she was a Study Manager with the Los Angeles branch of the US Army Corps of Engineers for 8 years and prior to that a recruiter for Boeing also in Los Angeles.  She previously served as Board Member for the Newport Bay Conservancy.  Krista holds a MPL in Planning from the USC Price School of Public Policy.